Rangoli, also known as Kolam or Muggu, is a folk art from India in which patterns are created on the floor in living rooms or courtyards using materials such as colored rice, dry flour, colored sand or flower petals . The Rangoli competition was held on the Valia Hall.

The competition was judged by Mr. Arvinder Kaur. The theme for the event was birds of India. Eight colleges sent our two participants each to showcase their artistic flair. The golden rule of the event was simple- no permanent colours were to be used. It was truly a spectacular event to watch, we hope to see more creative Rangoli in the upcoming years of Umang. 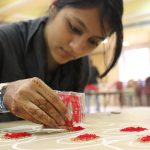 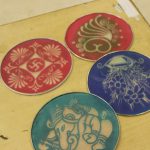 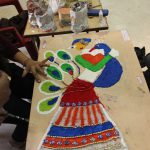