“The Arena” – the sporting turf at the Bhawanipur Education Society College (BESC), was witness to a flurry of gaming activities, a last adrenalin rush, before the students transit into the exam mode and prepare to smash and volley through academics.

The spectacle was flagged off with the Bhawanipur Premier League Tournament (BPLT) and the Badminton Tournament, Next in line was Futsal – a sport that calls for extreme skills and fitness and is fast gaining ground in terms of popularity, especially among the young, the world over. In keeping with BESC’s tradition of being the prime mover, students have taken on the game with whole hearted enthusiasm as was evident from the participation and the crowds that gathered to cheer respective teams during the tourney. In all 28 teams vied against each other for the mantle of the champions. After a series of exciting (and exacting, not to mention exhilarating) matches, the team lead by Jeffin Mathews and the team captained by Rahul Kumar Gupta reached the finals. The finals were played out on 25th of March in the presence of dignitaries and appreciative crowd. Team Jeffin emerged victorious by a narrow margin.

The Basketball tournament was the ultimate in the series of sporting events scorching the turf. A total of 14 teams – 11 boys and 3 girls – participated in the tournament which not only witnessed a flurry of deft moves and incredible “dunks”, but was also appreciated for the overall proficiency of the students in the game. Closely contested and cheered by an appreciative crowd, the tournament did not call a time-out, proceeding to the finals on the 29th of March. The team led by Shiva Bai and the team captained by Anmol Gandhi slogged it out with the ball bounding and rebounding from one basket to the other. In the end, team Shiva triumphed, but only so, with team Anmol having given a very spirited fight. In the girl’s section, the team led by Priti Kumar Mishra emerged victorious. 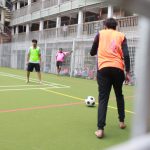 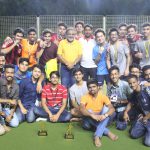 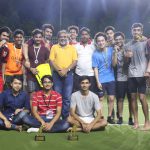 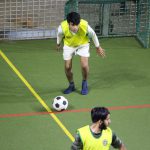 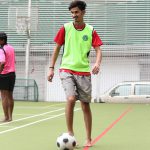 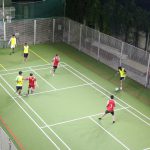 All the trophies were handed over by Prof Dilip Shah, the Dean of Student Affairs of the College.

“It is extremely heartening to see our students doing so well in so many diverse sporting activities” said Prof Dilip Shah. “Sports and games, apart from working as a catharsis, go a long way in instilling values of hard work, dedication, team spirit …. Values that stand one in good stead not only in academics but also in life. I thank each one of you – the ones who have scorched on the arena and the ones who have silently worked in the background to make these events into hugely successful ones – for the dedication and the hard work. The trophy may have been carried by the winner, but the real winners are the ones who toiled, without even being in the contention of the prizes. Yes, I am talking about the volunteers. Their contribution as always, is prize less. It is contributions like these that make BESC what we are – Champions!”

Posted in Sports.
Share
PreviousPublication of Re-examination and F.S.I results of Part-I B.A & B.Sc (Honours)
NextTo the MUN and back: BESC organises the 2nd Inter College Assembly of Nations