The Department of History, The Bhawanipur Education Society, organized an educational trip to Agra from 13th to 18th April, 2022. Twenty five students of semesters 2, 4 and 6 were accompanied by all the faculty members bringing the total up to thirty three. We departed from Kolkata Station on the afternoon of 13th April and reached Agra cantonment the next morning. 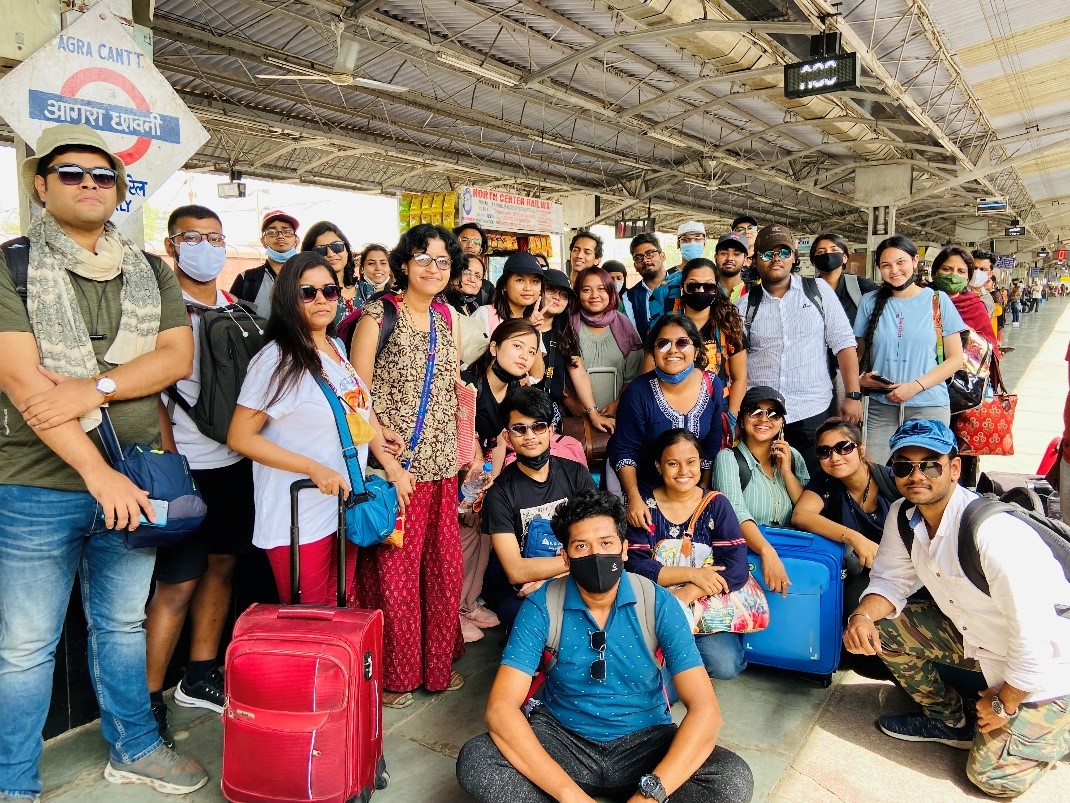 After refreshments and lunch, a trip to Akbar’s tomb in Sikandra was planned in the late afternoon of 14th April. Here the students learnt about Islamic architectural styles and the distinguishing features of royal Mughal funeral tombs. In addition to Timurid styles, it was fascinating to witness the combination of architectural features of the Rajputs as evidenced in the chhatris at Akbar’s tomb. It was indeed a fitting tribute by Jahangir to one of the greatest Mughal rulers – Akbar. 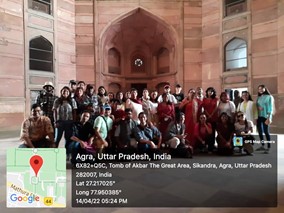 At Sikandra, to visit the tomb of Akbar

The next day (15th April) was reserved for our long awaited visit to Fatehpur Sikri, the first planned city of the Mughals, located 38 kms from Agra. We left around 8:15 am after breakfast and reached in roughly an hour. On arrival, we visited Diwan-i-Aam, Diwan-i-Khaas, Panch Mahal, Jodha Bai’s palace, Anup Talao, the dargah of Shaikh Salim Chisti, Jama Masjid and Buland Darwaza. The brilliantly planned city, the aesthetic sense, the architectural styles borrowed from Gujarat, Mandu, and Rajasthan were explained to the students. After 3 and half hours, we left for our hotel, successfully wrapping up our visit to one of the earlier capitals of the imperial Mughals. 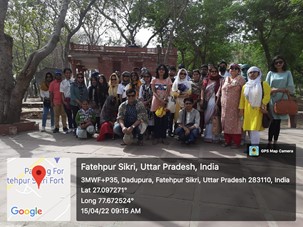 At the northern gate of Fatehpur Sikri 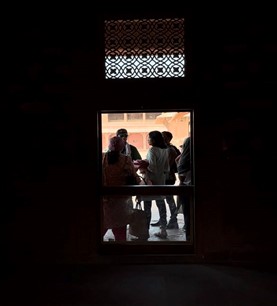 A demonstration about architectural styles 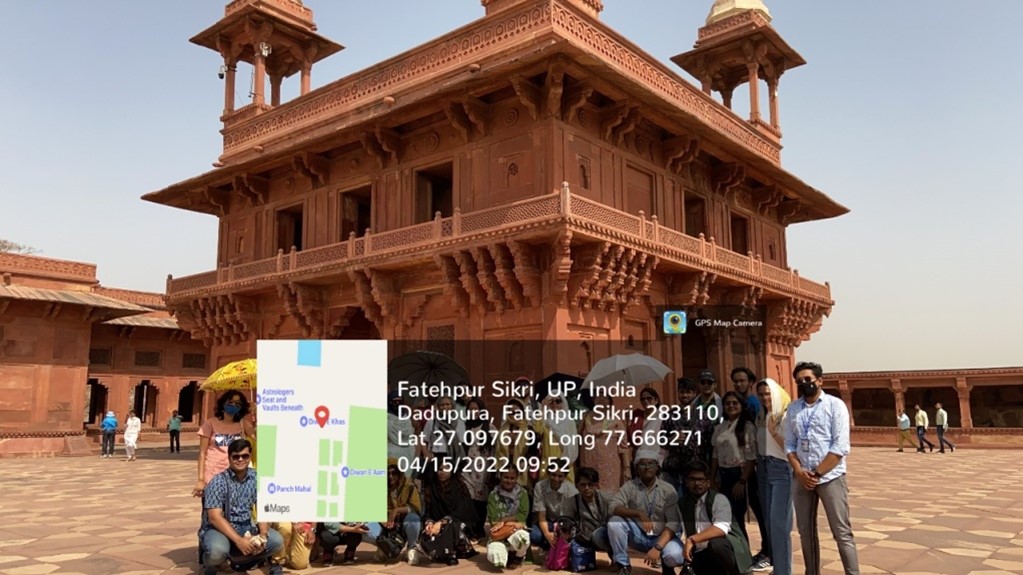 In front of Diwan-i-Khaas in Fatehpur Sikri

On reaching the hotel and quick rest, we left to visit the tomb of Itimad-ud-daula at 3:30 pm. This was one of the sites we were all looking forward to, considering it is believed to be the prototype of Taj Mahal. The single-storey marble structure located in a chahar-bagh was constructed entirely in marble and decorated in pietra-dura style. Visiting the tomb located on the banks of Yamuna, as commissioned by Nur Jahan after the demise of her father, Itimad-ud-daula, who was the wazir (prime minister) in Jahangir’s reign, it was an exceptionally crucial educational experience. 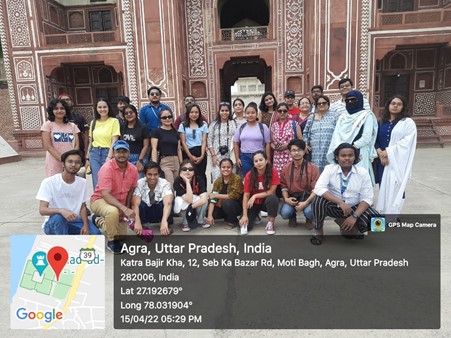 At the gates of Itimad-ud-daula’s tomb

It was on 16th of April (Saturday), that we finally had an opportunity to visit the Taj Mahal. A monument which epitomized the beauty and sheer genius of Mughal architecture, the Taj Mahal stood resplendent in its glory rendering us speechless. The symmetry, the geometry, the vision of the patron, the arabesques decorating the marble structures, the pietra dura emblazoned on both its exterior and interior, the Taj is truly unparalleled. 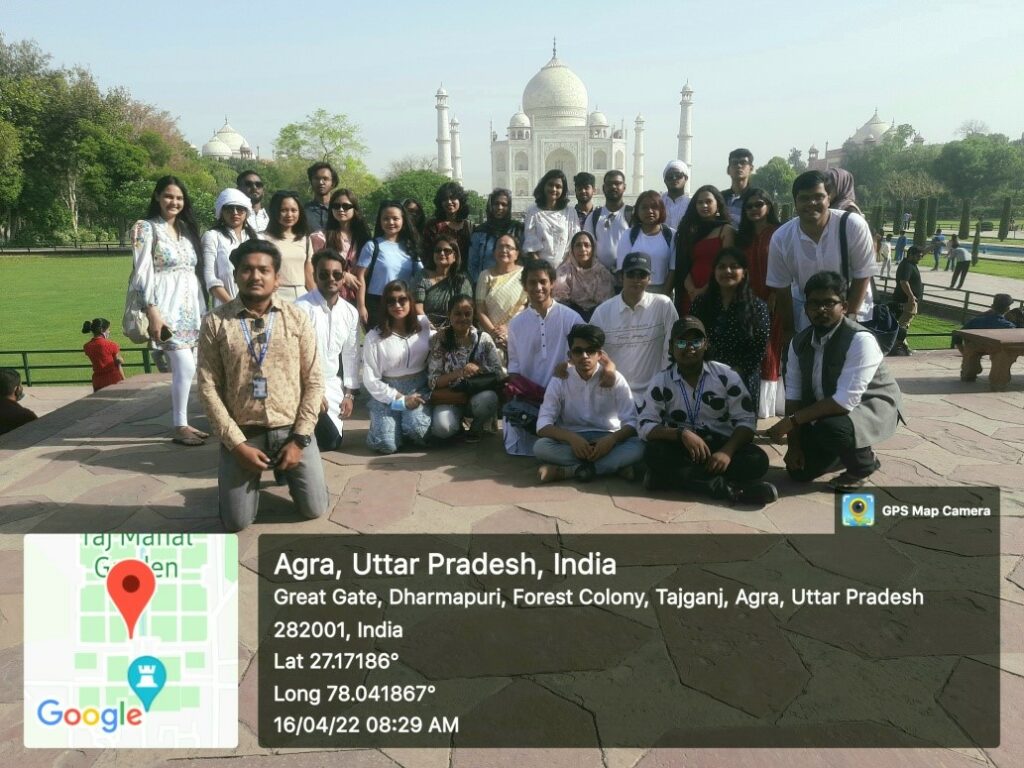 The final stop wrapping our academic trip to an end was to Agra fort. We left for Agra fort at 3:30 pm on the same day and the grandeur of the crenellated walls welcomed us in the late afternoon. On entering, we saw Jahangiri Mahal, Muthamman Burj, Diwan-i-Aam, Diwani-i-Khaas, Mina Masjid, Sheesh Mahal, Baoli and the section where Shah Jahan was held captive for the last eight years of his reign. A fitting end to our trip, we left the fort after three hours, replete with priceless memories of this academically stimulating trip. 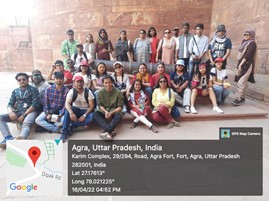 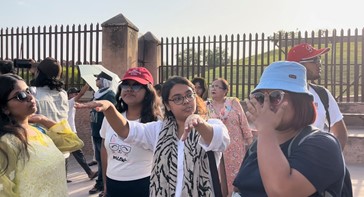 A practical demonstration on the field!

On the 17th of April, 2022 we left for Delhi around 9:30 am. It was a five hour bus ride from Agra to New Delhi (including an hour’s break for lunch) through the Yamuna Expressway. Boarding the Rajdhani Express at 4:30 pm in the afternoon, we reached Kolkata in the morning of 18th April. A successful and academically productive trip, the Department would like to take this opportunity to extend its gratitude to the college for its generosity and prompt acceptance and whole-hearted support of the Department’s initiative. We hope to conduct with such trips in future as well.