Peer Webinar is a novel initiative taken by the Department of English as an attempt to encourage academic dialogue and widen research perspectives amongst the members of the faculty in the department of English. The final semester students of M.A English are also included as audience in order to encourage research aptitude and familiarize them with research methodology. As a part of this ongoing regular process, the Department organizes a peer webinar each month where a member of the faculty presents their research paper in front of the other teachers of the Department and the final semester students of M.A English.

The fourth chapter of the departmental Peer Webinar was organized by the Department of English, The Bhawanipur Education Society College on 25.02.2022 from 7.00 p.m. In this session, Prof. Tathagata Sen, Associate Professor, Department of English, delivered a presentation entitled “Farewell to Form: Visual Arts and the Theatre”. Prof Sen started by introducing the topic as a result of his observations with reference to the contemporary world. He said that the turn of the events from the global pandemic to the present global military crisis remind him of the darkness and the anarchy manifested in the art movements of the 20th century. He referred to W.B Yeats’ famous line, “Things fall apart center cannot hold” and shared his thoughts with the audience. Referring to Rabindranath Tagore, Prof. Sen said that Tagore had shuddered to see the crumbling ruins of a proud civilization and called it the greatest disillusionment. He returned to the apocalyptic vision of collapses which pervaded the world through the 20th century and reflected how there is a recurring picture of a disintegrating world which can be found in arts and literature throughout the last century. There was a constant endeavour throughout this period to redefine the purpose and meaning of life and the artists expressed their despair in two brief but important art movements of the West – Dadaism and Surrealism.

Dadaism emerged as a reaction to the First World War and was a state of mind representing the bitter inarticulate discontempt that gripped the poets and artists of the time. Prof. Sen argued that when seen against the background of this cynicism and the resultant nihilism, it is not difficult to see why Dadaists tried to explore the new art to replace the obsolete ones. Dada wanted to displace the logical nonsense of the man of the contemporary times and was senseless like nature – thereby, against art. Prof. Sen informed the audience with reference to various examples that in the context of Dadaism, the demolition of art could be absolutely literal – inviting the people to recast form. Outraged by the ethical decadence of the society, Dada sought to create unpremeditated attempts to break logical consequences and bid farewell to form, which represented logical coherences, as they were deemed to be redundant. Referring to Francis Picabia’s assertion that the real modern works of art are not made by artists, but quite simply men, Prof. Sen highlighted the vision of the Dadaist movement which dissociated the idea of art from any exceptionally aesthetic association. 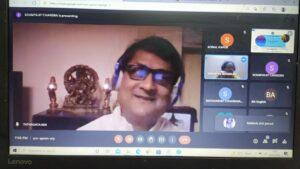 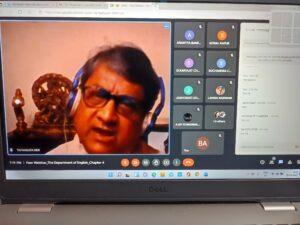 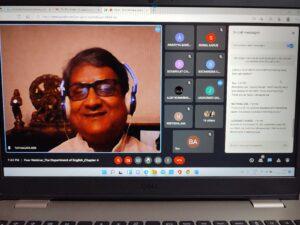 Dadaism in Art was soon followed by Surrealism which emerged as the most powerful art movement of the 1920s and 30s. Surrealism adopted Freudian psychoanalysis and the Surrealist Manifesto of 1924 defined it as the dictation of thought free from the exercise of reason. The artists were now free to create according to the dictates of their subconscious mind a new pictorial register. This movement facilitated an explicit abandonment of conventional forms, while trying to capture the unfathomable inner recesses of the mind. Prof. Sen illustrated his point with reference to André Masson’s ‘Automatic Drawing’ where the pen moves swiftly and nervously creating a labyrinth of lines and some figures look complete while the others are incomplete. He also referred to Salvador Dali’s painting depicting melting watches being devoured by insects – which is the best-known surrealist painting of the world.

Tracing a connect with the present world of disillusionment and violence, Prof. Sen observed that though Surrealism failed to be a continuous movement, it still continues to inspire literature and arts. In fiction, its presence is felt through innovations in narrative techniques, breaking away from form and insufficiency of the rational approach. He enumerated his point with reference to the Theatre of the Absurd which broke away from conventional form. He illustrated this by mentioning the plays of Samuel Beckett, which are characterized by a complete absence of plot, character and logically coherent dialogues. The characters on stage are aware of the futility of their act and there is absolutely nothing to look forward to. He drew the attention of the audience towards the linguistic innovations adopted by the playwrights and observed how sometimes even the language undergoes a radical revaluation and is reduced to apparent gibberish. It was the devastation of the Second World War which led thinkers and writers to think that everything eventually boils to nothing.

Prof Sen observed that the Theatre of the Absurd offers a grotesque depiction of this world. He argued that a quest for freedom in a dark directionless desert was central to all these movements and paradoxically, in their attempt to break all form, the artists and writers ended up creating a new form. Prof Sen connected this darkness and anarchy felt through these movements in arts and literature to the contemporary times. He opined that some Surrealist elements can also be seen in the paintings of our own contemporaries, while the Theatre of the Absurd resonates in the playwrights of our times such as Badal Sircar. He concluded his paper with a reference to the dialogue in Beckett’s Endgame where Clov tells Hamm, “You know what she died of, Mother Pegg? Of darkness.” Prof Sen ended by saying that in the present world, we are all also plunging into the darkness present in this world – a metaphysical, overwhelming darkness.

The webinar was conducted through the GSuite for Education made available by the College and was moderated by Prof. Ananyya Banerjee