The modern lifestyle is an unbalanced mix of frantic work and stressful personal life. This is where the significance of vacations comes into play. It frees us from our everyday routine and allows us to relax.

“A journey well shared is a journey well enjoyed”, keeping this notion in mind like every year the students and professors of Department of Business Administration of The Bhawanipur Education Society College took their backpacks, packed their things, and left for a pleasant holiday to Visakhapatnam from 2nd March 2022 to 6th March 2022.

The Gem of South India, Visakhapatnam with its ultimate blend of culture and modern heritage, hypnotizes everyone, whether an experience seeker, history lover or an adventure enthusiast. With a history dating back to the 18th century and the status of the metro city, Visakhapatnam invites holiday makers to enjoy a comfortable and promising stay. 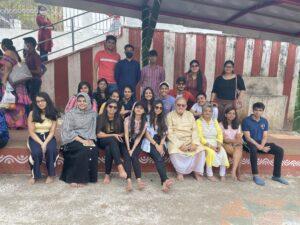 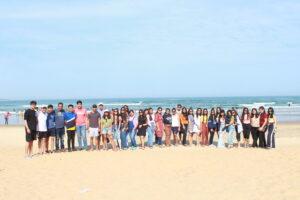 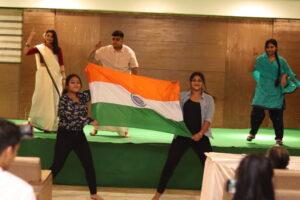 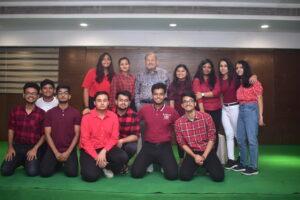 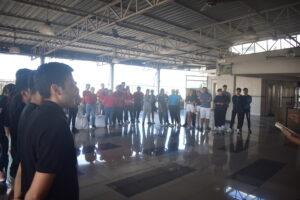 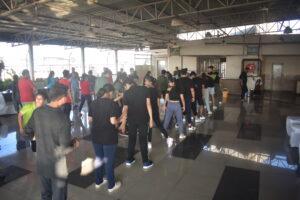 This was an annual team building excursion for the students and the teachers. It began on 2nd March 2022 with 50 students and 4 teachers boarding the train from Shalimar Station, Kolkata at 4:10 p.m. sharp. The train journey was filled with excitement and joy. The train arrived at Visakhapatnam at 5:30 a.m. in the morning, after which all the students and teachers boarded a bus to the hotel. Everyone checked in to Hotel Daspalla with a very warm welcome by the staff there. After allotting everyone to their respective rooms all the members were asked to report for breakfast post which all 4 teams, that is, Team Black headed by Prof. Kaushik Banerjee, Team Red headed by Prof. Paridhi Agarwal, Team Green headed by Prof. Pritha Chanda and Team Blue headed by Prof. Mahesh Hathiramani began with their rehearsals for the cultural programs, that were to be held in the evening.

The aim of this excursion was to strengthen the team building qualities within students and also their mentors. Hence, all the students and professors were pre-divided into four teams namely, Red, Black, Green, and Blue. Each team was led by a mentor. The team building activities were segregated into three parts- Cultural Contest, Sports, and Business Presentation. 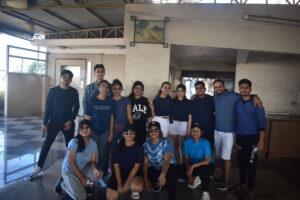 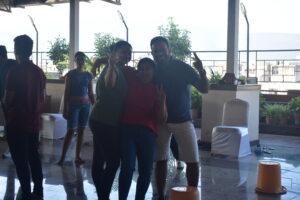 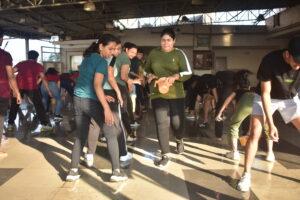 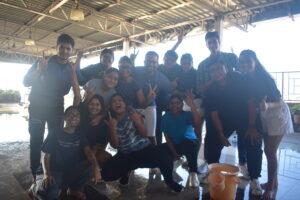 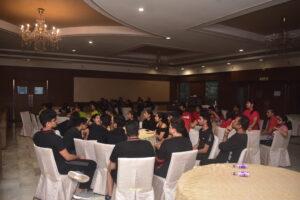 In the afternoon, post lunch from 3.30 P.M onwards the teams started with the sports activities- the first game to be played was ‘Fill the bucket’ in which all the students were to stand one after another and one empty bucket was kept at the front and one bucket filled with water was kept at the back and the students had to fill water in a mug and pass it from the last member to the one in front. The game saw teams competing against one another fiercely.  Followed by Fill the Bucket was a Communication Skill game. The leaders were supposed to pass on a riddle by whispering it to one of the team members, who again had to pass the same to the other teammates and so on.

All teams were marked on punctuality as well. From 7:00 p.m. onwards, cultural programmes began, in the presence of our judges, Director General Prof. Dr. Suman Kumar Mukerjee and his wife Mrs. Sudakshina Mukerjee. Each team had put in a lot of effort and the audience witnessed all teams dance, sing, and perform skits. From nostalgic 90’s songs, energetic dances, funny acts to diversified fashion shows the night turned into an entertaining one. Few of the skits brought out a sense of patriotism and the love for our country in all of us. The night was concluded by having delicious dinner. 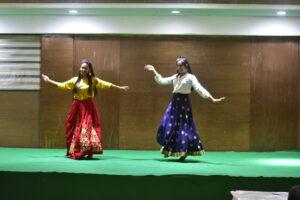 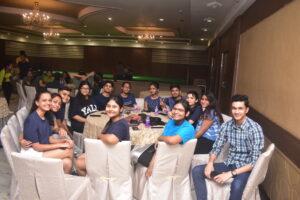 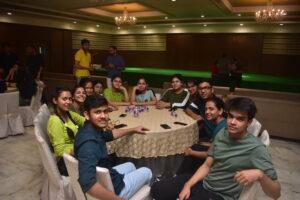 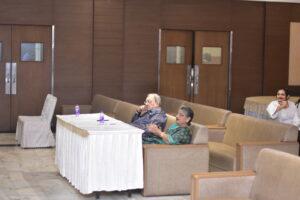 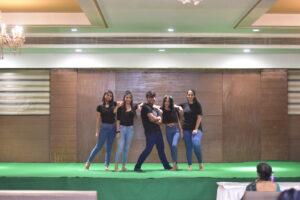 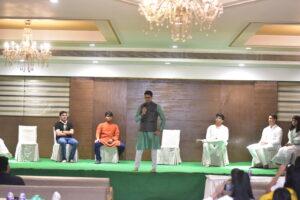 The next day, students and professors had the morning off to go out and enjoy the beauty of the city. Nearby beaches and sightseeing spots were the attractions for the day. After lunch, the second part of the sports continued. Team building games like Blindfold Snake and Lime-Bottle Race were played. Lime and Bottle Race as the name suggests each member had to relay race with a lime and a bottle, the next game was ‘Snake Blindfold’ where all the members were blindfolded and had to move across the room with hurdles and lastly had to crawl out of a hoop.

The most important competition of the trip took place in the evening, that is, the Business Presentation. Each team was provided with topics a few weeks before their departure, hence they had ample time to prepare for the same.

All of the teams were given a unique and interesting topic to present upon- Team Red was given ‘Evolution of Demographics Heterogeneity will stole the advantages of a Demographics Dividend’; Team Black was given ‘Geopolitical crisis has been precipitated by China’s Maritime Activities’; Team Blue was given ‘Self Reliance makes without self sufficiency’ and Team Green was given ‘India needs to mind the gap- Extreme Income Inequality in numbers’. The presentations provided a podium for the teams to express their opinions and thoughts on topics of national importance. 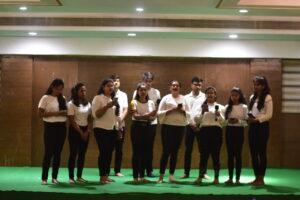 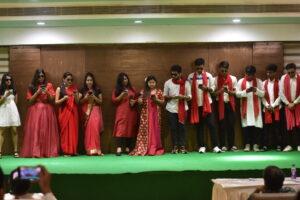 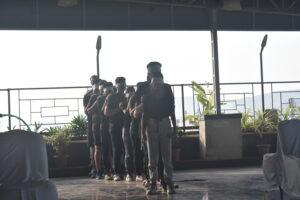 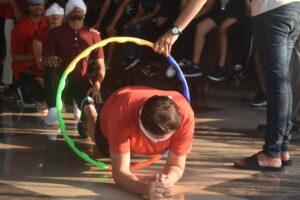 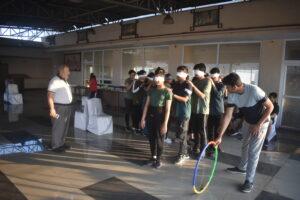 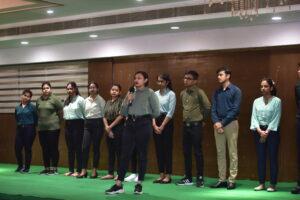 Eventually, the moment of truth neared. After calculating the points for the entire team building activities, Prof. Dr. Suman Mukerjee disclosed the final marks and announced Team Blue as the winner. Winners Trophy was awarded to the mentor, Prof. Mahesh Hathiramani and winner’s certificates were provided to the team members. Participation Certificates were provided to all the teams. The night ended with a variety of delicacies being served by the hotel.

The third and the last day at Visakhapatnam was what the students accompanied by the professors, were most excited for. They travelled all around the city and enjoyed each beautiful attraction of the city filled with history and natural beauties.

The last day the students visited Simhachalam Temple post breakfast followed by other places like Rushikonda Beach and Kailasagiri where they went on the ropeway and witnessed beauty of the sea next to busting city lights of Visakapatnam.

At Rushikonda Beach the students enjoyed the sea breeze and a speed boat ride which grabbed everyone’s attention. 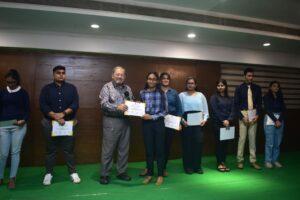 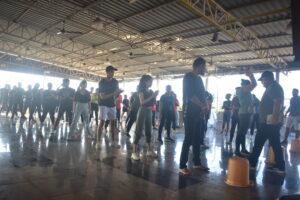 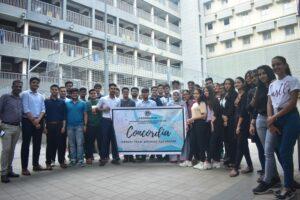 After a marvellous tour around the city the students headed back to hotel, but the fun was not over yet as many of them opted for a plunge in the swimming pool of the hotel, where the students relaxed and had fun for the last few hours in the city. Eventually they had to gear up for the return to their hometown the next morning.

On 6th of March 2022, everyone bid farewell to the lovely city and promised to cherish the sweetest memories they were taking home as a token.

The students boarded the train at 9.30 a.m. to head back to Kolkata. The train arrived at 11:55 p.m. sharp at Howrah Station, Kolkata. The team saw fierce competition as well as strong bonding of all the members from all the semesters. It was a much-needed break for the students to refresh their mind for a renewed focus from the following week amidst the Pre and Post Covid Scenario.

The entire trip was coordinated and organized by Prof. Dr. Suman K Mukerjee as well as the Events Teacher Coordinator, Prof. Kaushik Banerjee along with the Student Presidents of BBA Department, Madhav Mohta and Devjyoti Banerjee.