On 27th June 2020, an online reading session titled ‘Writing in the Time of Calamities’ (IQAC Approved) was organized by the English department of The Bhawanipur Education Society College in collaboration with its counterpart from Loreto College. The event was open to all the faculty members and students of the two colleges. Faculty members from other colleges were invited too. The session was organized on Google Meet. More than 70 people were present at the event, which included English faculty members and students from a multitude of colleges and universities of the city, including Presidency University, Techno India University, Basanti Devi College, Ashutosh College, Surendranath College, Shri Shikshayatan College, Heritage Institute of Technology and Naba Ballygunge Mahavidyalaya.

In light of the recent dual catastrophes of a pandemic and a super cyclone, Dr. Suchandra Chakravarty, Teacher-in-Charge of The Bhawanipur Education Society College decided to organize this online reading session. It was decided that in this event, English faculty members and students from both colleges would be reading out excerpts from literature based on the human experience of calamity, ranging from pandemics to natural disasters. This event was intended to make a difference in the current times when webinars are being widely organized by numerous academic institutions. It was meant to serve as a meaningful intellectual experience where academicians would get the opportunity to familiarize themselves with those great works of literature written in and about times of calamities.

The reading session commenced at 3pm with the inaugural addresses of the Heads of the respective colleges, namely Dr. Suchandra Chakravarty, Teacher-in-Charge of The Bhawanipur College, and Sister Christine, Principal of Loreto College. After this, there was an initial round of presentations made by the students of the English departments from either college. Raka Mukherjee, PG I English student from the Loreto College made the first presentation where she recited Fever 1030 by Sylvia Plath. The poem explored the rich imagery born of a fever-ridden mind. The second presenter was Drishti Shroff, UG Sem 4 English student from The Bhawanipur Education Society College. Drishti read out a creative prose piece of her own composition titled An Oasis in my Soliloquy. Her performance was followed by that of Akanchcha Khetry, PG II English student from the Loreto College, who read out some portions on the Great Fire of London from the Diary of Samuel Pepys. The final student presenter was Swarit Dutta, UG Sem 4 English student from The Bhawanipur Education Society College, who read out an excerpt from A Journal of the Plague Year by Daniel Defoe. The texts chosen by the student presenters explored the social and psychological ramifications of natural calamities.

Subsequently, it was the turn of the English faculty members from either college to deliver their respective performances. The round was opened by Dr. Sukanya Dasgupta, Associate Professor of English at Loreto College, who read out an excerpt from Death in Venice by Thomas Mann. The audience got to hear lines from that significant juncture of the text when plague was spreading through the city of Venice and the authorities were refusing to acknowledge the existence of a fatal infection. Aschenbach, the protagonist, turns a deaf ear to it however, postponing his departure due to his love for the young adult Tadzeo. Dr. Dasgupta’s performance raised the question: “what influence does a contagious disease have on the already ‘diseased’ brain of a lover?” 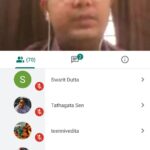 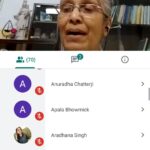 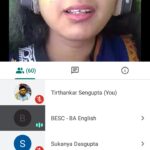 The next presenter was Ms. Sonal Kapur, Assistant Professor of English at The Bhawanipur Education Society College, who read out a short story by Rajinder Singh Bedi, whose title in English translation is Plague and Quarantine. Ms. Kapur read out an excerpt from the original Urdu story before moving on to the English translation. Bedi’s short story captures with vivid detail the onset of plague in a north-western town of India, and its fearful consequences. One cannot help being reminded of several recent experiences in light of the pandemic, which include fear, secrecy, hesitation, apprehension, and mistrust for the system.

Subsequently, Ms. Sulagna Chattopadhyay, Assistant Professor of English at Loreto College read out several paragraphs from Oryx and Crake by Margaret Atwood. We come to know of the protagonist, Snowman, who survives in a post-apocalyptic world which had fallen prey to pandemic. Ms. Chattopadhyay’s performance had all the refreshing verve of science fiction.

Finally, Mr. Tathagata Sen, Associate Professor of English at The Bhawanipur Education Society College read out from The Plague by Albert Camus. Mr. Sen successfully brought out certain facets of an epidemic experience, namely fear, disillusionment, ignominy and hedonism. The human race, in spite of its rationality, lapses into the most abject irrationality in the face of crises.

The presentations were followed by an interactive session where members of the audience not only made comments and observations, but also asked questions to individual presenters which led to extensive discussion on the current pandemic situation. The impact cast by the pandemic on different sections of the society, namely women, children, backward classes and the LGBTQ population was brought up. It was agreed unanimously that the relevance of pandemic literature lies in its cathartic role. In times where rates of suffering and disappointment run high, literature attempts to confront readers with artistic representations of their own mental conditions, thus helping them to come to terms with troublesome emotions, and muster the strength to pull through.

The reading session ended on a note of optimism. In her concluding address, Ms. Ananyya Banerjee, M.A. Coordinator for The Bhawanipur Education Society College conveyed the message of human bonds. “No matter how hard this pandemic attempts to separate us”, she said, “the more shall we try to remain connected to each other in spirit”. Ms. Jashomati Ghose, Assistant Professor of English at The Bhawanipur College delivered the vote of thanks. The event was hosted by Mr. Soumyajit Chandra, her colleague and co-coordinator. The Writing in Calamities Reading Session was an attempt to provide the consolation of literature to the troubled human mind in these times of uncertainty and peril. It was a celebration of the works of those great souls who have made attempts to make roses bloom out of thorns.