December 16th 2019, Society Hall. The Bhawanipur Education Society College (BESC) has perhaps got the highest per capita stock market investors in colleges of its class, with most students either investing or taking active interest in the working of the capital markets. It is a phenomenon that is not only recognised and lauded by the management, but the habit is actively sought to be encouraged, as it is the sock markets that help bring the scattered savings of the economy into deployment for the creation of National Wealth. 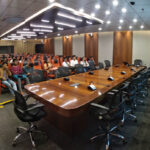 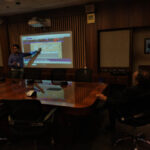 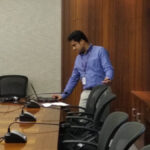 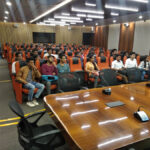 Naturally, senior NSC officers choosing the campus to highlight the features of their trading platform through a simulation was no exception then, as was pointed out by Prof Dilip Shah, the Dean of Student Affairs of the BESC, while welcoming Avik Gupta from the Exchange. A keen follower of the market trends and their workings, Prof Shah, also an investor shared his wisdom about investing right and the characteristic traits to look out for, before felicitating the guest and handing over the microphone to him.

What followed was a detailed presentation on the working of the NSE trading platform, with the speaker going into the intricate details to highlight its advantages. However, keeping in mind the needs of the average students and the new investors, he made it a point not to go too deep into the specifics and spiced his talk about the fundamental and technical aspects that lead scrips to behave the way they do, often using historical data to identify the points that should be considered for entry and exit into the market in general and specific scrips in particular.

The fifty odd students who were present found the discourse extremely enlightening and informative which was communicated to the speaker by more than one member from the audience when the session was made open to questions from the floor. The audience had a number of questions for the speaker, who went on record to state his admiration for the quality of the questions that were raised, before taking time to address every query that was put forward.

“Honestly speaking, I am extremely impressed by the kind of questions that were raised by the BESC students” he said, adding “it obviously alludes to the depth of knowledge that is prevalent among certain sections of the student and their keen ness to learn more about the market, considering the young ages of the average student, is really something to take note of. It was a pleasure being here, having interacted with such an obviously well-informed batch of students and I look forward to being here again, to spend more quality time” he said.