November 16th, 2019. Placement Hall. Masks have been an integral part of man’s socio-cultural development and when the first mask was made, or for what purpose, has been a matter of debate among anthropologists and historians that remains inconclusive to date. To cut a long story short, a mask is an object normally worn on the face, typically for protection, disguise, performance, or plain entertainment. Masks have been used since antiquity for both ceremonial and practical purposes, as well as in the performing arts and for entertainment. They are usually worn on the face, although they may also be positioned for effect elsewhere on the wearer’s body.

The use of masks in rituals or ceremonies is a very ancient human practice across the world, although masks can also be worn for protection, in hunting, in sports, in feasts, or in wars – or simply used as ornamentation. Some ceremonial or decorative masks were not designed to be worn. Although the religious use of masks has waned, masks are used sometimes in drama therapy or psychotherapy and mostly find use as mantle or conversation pieces these days. 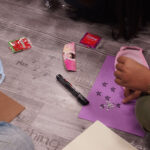 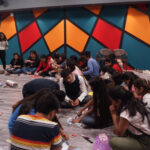 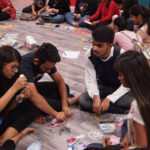 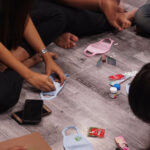 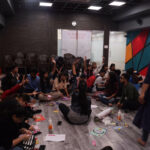 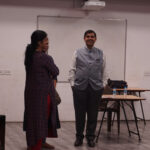 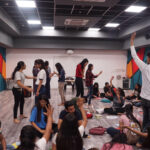 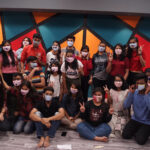 The students of the Bhawanipur Education Society College were introduced to this exciting world of masks through a mask making workshop. Prof Dilip Shah, the Dean of student affairs of the college regaled the audience with a number of interesting facts about masks and their significance in the development of cultures that were unknown to the students.

Prof Shah told the near incredulous students how, in ancient Greece brass masks were extensively used in theatre, masks that had megaphones built into them that were used to amplify the voices of the actors. He talked about the Duk-duk and Tubum masks of New Guinea where used to intimidate and enforce tribal order. He explained about the famous MorettaMuta masks of Venice that had no strings to attach them and women had to clench a button at their back with their teeth to hold the masks in place. He also talked about the belief that the masks work by ritual dancers, for example in Indonesia, were not supposed to be work by others in the fear of offending the spirits. How in Egypt, death-masks were used so that the Gods could recognise the voyagers in their afterlife. He pointed out how masks were used during wars to intimidate the enemy – a practise that is still prevalent, especially in sporting games like ice hockey. He ended his engrossing piece rueing the fact that despite their rich tradition, masks have now been reduced to most an aid against pollution!

Prof Shah then went on to talk about the use of masks in Indian culture – in dance forms like Kathakali and Chhou, apart from their extensive use in a variety of art forms including theatre that had sprouted in different parts of the country at different times and are still in vogue. He talked about Noh masks in Japanese theatre that are created with such artistic ingenuity that they are capable of depicting different emotions. Masks, he pointed out, also have a long custom of being used to punish and shame offenders in many cultures.  He also explained the significance of masks in religion, explaining for example, the reasons behind some Jain sects covering a part of their faces with cloth masks.

Prof Minakshi Chaturvedi welcomed Swati Agarwal from the Pearl Academy who was the guest of honour for the event and felicitated her on behalf of the management, faculty and students of the college. An accomplished danseuse, Prof Chaturvedi spoke of the use of masks in different dance forms and pointed out how masks were and continue to be used to complement the storyline.

Different methods of mask making were discussed in the workshop as the visiting faculty took the students through practical demonstrations. While time constraints did not permit the discussion of the finer nuances of mask making, the students were given a thorough grinding of the basics which was enough to stoke their creative interest, with many professing interests to take up the artform.

(This report has been filed by Anchal Agarwal along with camera person Ishani Mitra of the Expressions Collective of the BESC. Nandita Pandey was the student co-ordinator for the event.)