22nd May, 2019. The Library. The anniversary of Noble Laurite Rabinbdra Nath Tagore was celebrated with full solemnity and due reverence by the members of the faculty and students of the Bhawanipur Education Society College (BESC).

Attended by about twenty-five students, the event started with the Dean of Student Affairs of BESC, Prof Dilip Shah explaining the significance of Rabindra Nath Tagore’s thoughts, especially in relation to the sad state of things all around us in the present. He chose to single out Rabindra Nath’s love and concern for the environment and called on the students to express their thoughts. Swapneel Thakur talked at length about the growing menace of plastic pollution and what he thought would be effective measures to curb its tentacles from spreading. Yash Chamaria, Lakshya Agarwal and Puja Manot took the discussion further, lacing their discourse with anecdotes and statistics that shed light on the pall-pervasive threat being posed to the fragile ecosystem in general and life in particular by environmental degradation caused in equal terms by our ignorance and apathy in the use and abuse of plastics. 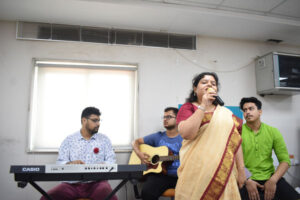 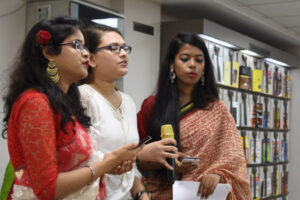 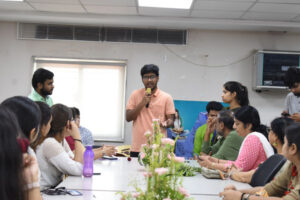 Anjali Dubey then took up the floor to present to the audience nuggets from Tagore’s innumerable creations, a presentation by Crescendo the music collective of the BESC, directed by Sourav Rakshit.

The first offering was a chorus “Prano Bhoriye”. This was followed by a solo performance by Gargi Ganguly who presented a perfect rendition of “Dariye Acho”. Monalisa Ghosh then proceeded to present a short recitation by the Poet Laurite which enthralled the audience.

However, it was “Akash Bhora, Surjo Tara” sung by Dr Vasundhara Mishra, poetess, journalist and member of the faculty of the college, which took the event literally to a higher scale. Anjali, Jyoti and Gargi then presented the evergreen “Tumi Robe Nirobe”, which did not allow the audience to appreciate in silence, leading to a spontaneous applause.

Mayank and his team from Crescendo then presented “Jodi tor Dak shune keu na ashe” a song that is perhaps etched forever in every Indian heart. Naturally, the members of the audience joined in the chorus leading to the melody floating to embrace every nook and corner of the college with a fervour that only such timeless songs and generate.

What added to the feeling was the excellent recitation of the piece, the English Translation – “Where the Mind is without fear” by Drishti Shroff.

Paramita Mukherjee a member of the college faculty also rendered a piece created by Tagore. The host’s mellifluous rendition of “Majhe Majhe”.

The programme was a success, for which credit must be given to the stellar performance of the accompanists with their musical instruments – Saurav Rakshit on Keyboards, Aditya Sharma on guitar and Ankush on Cajon.

In keeping with the solemnity of the occasion and in reverence of the BESC tradition – the dress code for the event was strictly traditional. Members of the faculty and students, draped in traditional finery added another dimension to the programme.

(This report has been filed by Drishti Shroff along with photographer Shouvik Das of the Expressions collective of the BESC.)