“Induction” quotes Professor Dilip Shah, the Dean of Student Affairs, Bhawanipur Education Society College, “is a procedure to introduce the debutants with the organisation and the glory associated with it”. With a glint in his eyes, he went on to talk about a number of collectives offered by the college which the new entrants can join in, apart from their academic courses. Professor Dilip Shah believes that education has got various layers and BESC provides a complete education with all the layers attached with it. “The Valia Hall” saw an electrifying ambience on 27th July, 2019 consisting of nearly 400 students from divergent streams like B.A, B.COM, BBA, B.SC who were enthusiastic enough to be acquainted with all the information regarding “Flames”.  The event commenced on 10:00 am in the morning and continued up to 2:00 pm. 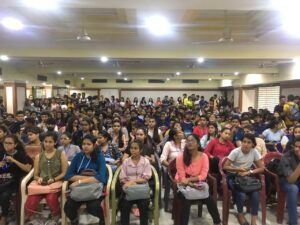 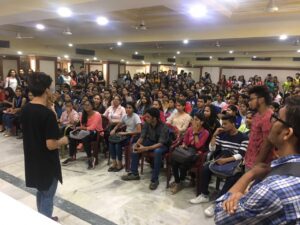 After being addressed by Professor Dilip Shah, the students had an interactive session with Professor Minakshi Chaturvedi who spoke at length about the origin of the collective and all the accolades it has been gathering since its inception. Professor Chaturvedi joyously proclaims that dance is the hidden language of the soul and this collective gives opportunity to all and sundry to find the hidden language and let it roll over the stage.

The event was continued by a chit-chat session by Russian, a 3rd year student  who talked about the dance teams, different dance forms performed in different programmes, and the prospective exposure the students will get after being a part of this system. The students were also ensured of the fact that they will get regular dance classes to finesse their skill throughout the year. As soon as the interactive session ended, auditions were arranged for the willing students who wanted to showcase their talent.2019 Flames Induction came to an end with the best dancers being given Red Bull cans as a token of appreciation and a vote of thanks by the Dean.