October 1st, 2019. Jubilee Hall. The Bhawanipur Education Society College (BESC) accords an inordinate amount of stress on the overall and all-round development of its students. While the traditional, text book centric classes are conducted as per the guidelines of the university, the students are deliberately exposed to a number of extra-curricular activities, so that they may pick up the skill sets that are required to go beyond the realm of the academics and succeed in the battlefield of life.

The students too lap up the opportunities offered to them by the college, as the seminars and workshops that the college organises for their benefit generally open newer vistas before them, often helping them choose career options that they have always dreamt of pursuing but did not know the right approach. Such Seminars and Workshops are often of the types that help students empower themselves with basic skills that are required for success irrespective of the field chosen for excellence, which perhaps is one of the underlying reasons for the average BESC student being a perennial favourite of the potential employers. 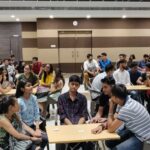 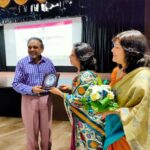 The workshop on Etiquette and Grooming fell in the second category, one that witnessed the presence of close to a hundred students crowding the auditorium. Prof Minakshi Chaturvedi gave the opening speech and welcomed the guests to the college with the bestowing of the honours. She then proceeded to introduce the speakers – Tanima Roy Chowdhury and Trina Dasgupta who are both accomplished exponents of the subject.

What followed was a solid session in which the speakers took the audience through a crash course on etiquette, literally grooming the students to take the leap of faith into adulthood. The importance of good etiquette was spelled out in details, with repeated stress on the fact that when it comes to the crunch, it is always the one with the good grooming who wins.

Instead of sticking to a monologue, the speakers made it a point to make the session as interactive as possible, carrying the audience with them, which naturally made the proceedings even more interesting to the students. The nitty-gritties of good, socially-correct behaviour, of etiquette and grooming where laid bare, with real life examples to which the students could relate to and an exhaustive list of do’s and don’ts were spelled out, which the students felt was a real take-away from the session.

The next part of the workshop comprised of questions and answers as the students poured their hearts – some seeking guidance to overcome their social awkwardness, while others asking the faculty for thumb rules as to gauge the mood of the audience to speak their hearts out. The questions flew thick and fast and the speakers, were inundated, something that they loved. “We have never had such a responsive audience” said Tanima Roy Chowdhury. Trina Dasgupta added “the sparks that flew had to be seen to be believed and it is indeed concerting to know that young people, who are rebellious by nature, were so concerned about knowing the socially acceptable mores, of learning how best to conduct themselves, to help etiquette make them keep winning”.

The students for their part, all their questions answered, were mighty impressed “the speakers not only knew what they were talking about, but were also extremely down to earth and friendly, which made the session such an enjoyable, even memorable one” said one from the audience. “Etiquette and Grooming, has always sounded boring to me when my mother broached the subjects, but here I actually enjoyed talking shop – the session was a success as it was far removed from the didactic sermonising that everything about etiquette that is sought to be pushed down our throats ultimately turn out to be” said another, perhaps indicating the pulse of the audience.

“Phew” said Tanima Roy Chowdhury, “am I happy with such a hugely positive feedback!” Fact is, as both the speakers stressed repeatedly, the kind of response elicited by their workshop had everything to do with the sheer positivity that engulfs the campus. “It is not that we do not go to other college campuses, not even that we don’t meet students of the age groups that we just addressed – it is just that the average student here in BESCF is far more receptive to change and much more attuned to accepting what they can see is good for them, which is a game changer in itself. Will certainly look forward to being here more often to spend more time with the champions”.

(This report has been filed by Rahul Singh Jagpal with camera persons Devansh Agarwal, Rohit Agarwal, and Kushal Vyas of the Expressions collective of the BESC)