The Annual convocation of The Bhawanipur Education Society College is a grand affair each year. This year it was all the more as this looked forward to the chief guest, the famous and much-loved Bollywood Actor Mr. Boman Irani.

Monday, 30th September 2019, was a date to go down in the annals of memories of more than 350+ students who were to be felicitated in the famed Kala Mandir. At 3.30 P.M the auditorium wore a different look as the graduating students of the college, all dressed in Black Robes with the Oxford Squares doned the seats and waited with bated breath for their turn to be called on Stage. 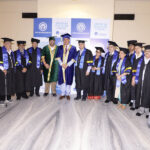 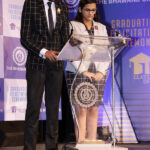 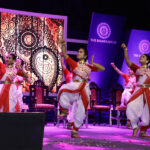 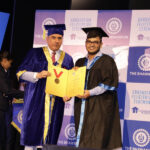 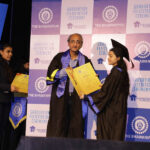 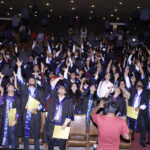 At 4:00 PM the convocation procession entered the hall as the Tagore’s poem “where the Mind is Without Fear” was read out from the Podium. The procession included the Chief Guest Boman Irani, President Sri Champak Lal Doshi, Vice President Miraj Shah, other members of the Committee as well as Dr. Suchandra Chakravarty, Dr Suman K. Mukerjee, Prof Dilip Shah and others. The function began with an auspicious classical dance by six of our students.

Dr. Suman K. Mukerjee welcomed the gathering in his opening remarks. Prof Dilip Shah congratulated and shared his feeling of nostalgia as passing out students who joined as caterpillars had transformed into butterflies and were now flying out.

Dr. Suchandra Chakravarty administered the oath for the graduating students. Sri Champak Lal Doshi felicitated the Chief Guest Sri Boman Irani. Then came the address by Chief guest who spoke at length on his own story of strength, failure, resilience and finally triumph. He bound the audience in a spell which broke into applause and laughter intermediately. Many lessons were shared in an impeccable style of his own. And when it ended intermittently, Prof Dilip Shah requested him to render a song. The Chief Guest was  forthcoming as he melodiously voiced his feelings straight from the heart.

The top ten students of the college were felicitated by Mr. Irani, subsequently Mr. Champak Lal Doshi,
Dr. Suman K. Mukerjee and members of the management and faculty members continued to do the honours. At the Podium names were read out by Mrigank Agarwal and Khushboo Kedia both students of the college. Finally, Prof Dilip Shah called out for the cheers when the entire gathering tossed the square high in the sky as if to say ‘Sky is the limit’. Those who cherished the evening most were the proud parents who witnessed their dear ones climbing the steps of success, indeed, a memorable evening for all.