January 11th, 2020. Heysham Road. “The Bhawanipur Education Society College (BESC)” said Prof Dilip Shah, the Dean of the College, “has the bad habits of not only sticking to its words but also of delivering more than it promises” amidst cheers from the crowd of volunteers who had gathered. 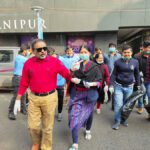 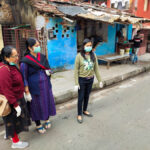 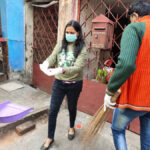 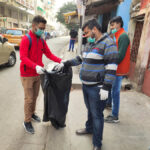 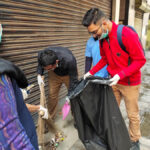 And they had a valid reason to cheer – it wasn’t even a month that the BESC Cleanliness Drive was launched with students spreading awareness and actually cleaning up the Elgin Road, that the next batch of students were ready to put the glitters on Heshyam Road. Prof Shah gave the flagging-off speech urging the students to incorporate cleanliness in their daily routines, walk the talk and be the example for others to follow.

Thirty students took part in the drive that has already started getting rave reviews from the concerned authorities and the local citizens alike. “The Bhawanipur Education has always been in the forefront of the drive to be inclusive and I can recall a number of initiatives taken by the college students that have made a positive impact on our lives” said a local resident who added that past BESC initiatives like sapling distribution and water conservation which were not only issues that needed direct intervention but were also ones about which awareness needs to be created, which he felt were very effectively addressed by the BESC initiatives. In the same vein, the Cleanliness drive too, he felt, was one that would leave a lasting impact, especially on the young, impressionable minds for which BESC had to be lauded.

As is the norm, students from the NCC and the NSS wings of the BESC spearheaded the drive.

(This report has been filed by KishanBagaria along with camera person Aditya Raj of the Expressions Collective of the BESC. The student coordinator of the event was KishanBagaria).