To know the Campus report to the intelligence Headquarters at 11:00 hrs on the 3rd oct 2016…read on!

The BESC, celebrating 100th year of Agatha Christie 1st novel was all set to take it’s students on a mysterious adventure. All college sleuths  were set to start their hunt for the murderer, of a crime most heinous, that too, within the college campus . 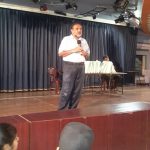 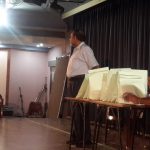 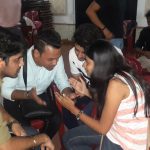 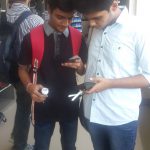 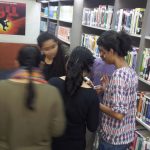 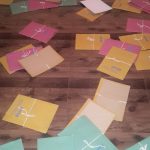 It all started at the College auditorium were the budding detectives got a sms saying ” Please help me I am dying, where the light cannot reach,the air starts to lack its existence and I am being suffocated and choked to death. The sound of my pain cannot be heard. My soul is waiting for you in the HELL.”

Our in-house mystery solvers Soumya Kapur (BA.English 3RD year) , Akhil Ladha(B.COM1ST YEAR and Anushriya(B.COM 1ST YEAR) started thinking where could they find the victim. The terms “Can not reach”, “No Light”, “Suffocated” and Choked to death” were the hints through which it struck to them that they should head towards the college basement, which somehow fitted the bill. Making their way through, they ran towards the basement where they found a dead body. A dead body, as in a corpse! Yeck! The moment they saw it our in-house Hercule Poirot, Akhil Ladha observed the place carefully and noticed that the place was marked with red tape saying “Do Not Enter” it was at this moment that they got the next sms, “ search for the code and then come where the knowledge is”. Our geniuses  knew exactly what it meant.

Anushriya said,”knowledge=Library” and with the code made them move towards the library.  They found out the book with their next clue which was “(101 don’t call me, but find me) I’m here somewhere use me !!”. The clue Finders (that’s what the group called themselves) was thinking in all possible directions. One said,”101 was an emergency no”. The other said,” use me!! Is written on dustbins”.

To link these were difficult but as you know nothing is impossible to BE-ites with brains. Thinking! Thinking! Thinking! Few mins passed and then Detective Soumya solved it as well. She said, “ 101 indicated “fire” and use me the “dustbin”. This was the Fire exit!”

They made their way through the stairs to the fire exit but found nothing until they searched the green room where they found “ WB 06F 665……..”. Our clue finders where smart enough to understand that this was a car number. This also meant that the murderer came by a car which was still there. Detective Akhil found the car where they got their next clue “Go back to where it all started”. It all had started from the Hell which meant that their next clue was somewhere near that. Going back to where it all started was a difficult journey so one of our clue finders entered the canteen for some snacks while the others continued.

Our clue finders knew that the murderer was making the riddle a progressively tricky one . While going through the menu they found some strange items  “Sodium Chloride limewater RS 20 , Lactobacillus shake RS 45 and Carbonic Acid Water RS 35” mistaken they were because those were not food items but their next clue. Finding these weren’t difficult for our mystry solvers. They knew excatlly where to find chemicals: The Chemistry Lab!. They moved on with their clue and searched the chemistry lab using their magnifying glass. This is what they found “ KNOCK! KNOCK! KNOCK! Dr.Asthana,the dean was here”. The questions that rolled in the heads of our dectectives were “ Who was Dr.Asthana ?” “Was the dean involved in the murder?”. Our clue finders went to The Dean’s Office but found the doors closed. It asked for a password. “THE PASSWORD??” They knew nothing about. They knocked the door again and again but no one answered their calls. Detective soumya got it! Yes they Knocked the door. Knock knock knock!! Was the password.

They entered the dark room where nothing was visible. Finding the room in a mess they started searching for the next clue. A file that was found after a tedious and meticulous search, had  a code in it. It was a IT riddle to be solved. Akhil went in search of a laptop and  entered the code.

Then appreared the names of the could be murderers. It was now time to search for the suspects. Going to each one of them was a gargantuan  task still our sleuths divine  crossed this level with flying colours as they got…..

“ You found many clues as hints at many places of the crime scene.

: The first was found “ UNDERGROUND”

:The third, in the “GARAGE”

: And sixth in “TECHNOLOGY”

This was what was they found. The murderer was somewhere around.

In mysteries, there are puzzles to be solved. The reader must piece together the clues, and if you do this one step ahead of the detective, BOOYAH!! You up with pride. CAN YOU?

Before you solve it was our CLUE FINDERS who completed and solved it. For it was an anagram, that too a pretty straight forward one that the criminal mastermind had challenged them with. “Its elementary, Watson, said our college detective, a sinister smile breaking across his face.”

The MURDERER was none other than

Was the Buddha smiling?