With 130 teams, and number of participants exceeding 700, the most awaited event BPLT 2020 continued for 6 quick days. The inauguration on 15th February, 2020 was marked with a cheerful and high-spirited speech from Prof. Dilip Shah. His speech boosted the confidence of the participants. Prof. Dr. Divesh Shah, the morning Commerce coordinator of the college, efficiently stated the rules of the match. The exhibition match played between faculties from morning & evening Commerce department, provided the participants with necessary clarity.

BPLT 2020 was back on familiar terrain, where no target is unchaseable and the batsmen are likely to hog the limelight. The sky-high determination did not compromise the enjoyment and entertainment of the tournament. 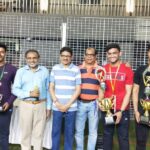 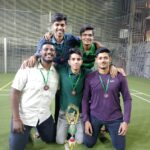 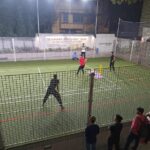 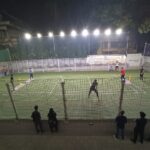 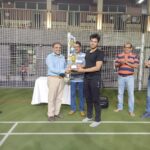 The semi-finalist teams were Captained by: Shikhar Thanvi and team, Harsh Dhanuka and team, Sakib Shahriwar and team and Aniket Gupta with his team. After a shoulder-rubbing match, Sakib Shahriwar and his team successfully secured the 2nd runner up’s position. The finalist teams were: Skipper Shikhar Thanvi with his team members- Shubham Agarwal, Shubham Taneja, Rohit Kaushik, and Nishant Daga and Skipper Harsh Dhanuka with his team members- Ankit Jain, Rishabh Vijaywargi, Adhiraj Johri and Bikram Prasad. The match created peak suspense for the audience where we saw Harsh Dhanuka defending his title and Shikhar Thanvi chasing the same. The crowd present had a reason to cheer when Harsh Dhanuka decided to bat first. He, along with his team scored 165 runs in 5 overs. The best was yet to come. Shikhar Thanvi chased the target in a crisp span of 3.2 overs, successfully claiming the BPLT 2020 trophy. The victorious smile was worth the wait for him and his team. The team deservedly won, conveying their individual excellence and teamwork that underpinned their little campaign.

Prof. Dilip Shah took pride in congratulating the winning team and the runners-up for their magnificent performance. He appreciated the cooperation of the event coordinators and volunteers. Mr. Jeetu Shah distributed the prizes among the winners; other sports faculty present were Rupesh Gandhi and Manikant Chowdhury. Eventually, the event was brought to rest with heads sowing dreams of next BPLT trophy!