June 18th to 20th, 2019, Valia Hall. The latest on an never ending list of experiences offered to the students of the Bhawanipur Education Society College (BESC) was a workshop-cum-competition of target shooting. The workshop was conducted by Atnaam Aslam a National level shooter along with Rittwick Sonkar with rich hauls in the state level shooting circuit and Mukesh Chaurasia.

Naturally, the excitement among the students was palpable – who doesn’t want to take aim and fire a gun? The venue was packed to the hilt and such was the level of excitement, that the registration had to be closed to accommodate the lucky hundred and fifty students who were selected for the workshop. 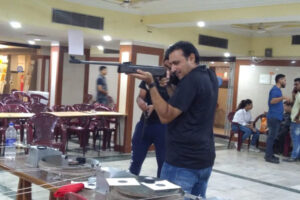 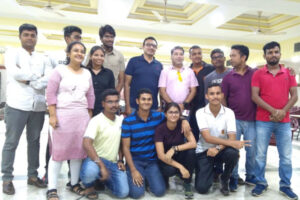 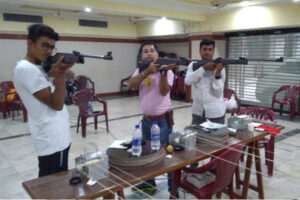 Prof Dilip Shah, the Dean of student affairs of BESC took the aim and fired the first shot to inaugurate the workshop, consistently hitting near the bull’s eye, much to the amazement of the visiting experts. He highlighted the facts that shooting is no mere sport and involves the complete mastery of concentration apart from taking one’s mind-body coordination to peak levels for success, discipline and practise being the keys to success. He pointed out to the students the key take-aways from the workshop that will stand them in good stead not only academically, but also in life. The visiting shooters were felicitated by him and given a warm welcome on behalf of the college and its students.

A three-target shooting range was temporarily set up on the Valia Hall, where each participating student was given a chance to get acquainted with the gun, correct their posture and grip and then fire the rounds. The basics of shooting as a sport, the mechanics involved in the working of the rifles, and the surrounding factors to be taken into consideration for achieving the perfect shot were explained by the experts, even as students learnt first hand that there is much, much more top shooting than what they har known from their exposure to sniper shooting video games.

The final day of the workshop witnessed a competition in which a hundred and thirty students participated. Each student was provided with an opportunity to fire ten rounds, their scores compiled and graded. Dixit Jain emerged on top in the boy’s section with an enviable score while Namita Singh won in the girl’s section having scored the maximum, which was comparable to the points scored by state level shooters, the experts informed.

“We are overwhelmed by the sheer energy in the campus and the passion of the students. Most of them were handling a shooting rifle for the first time in their lives, yet, the way they took up to the task is commendable” said Atnam Aslam, who is not only a top sharp shooter himself, but is also a revered coach. “I am extremely grateful to the college authorities for giving us a chance to showcase rifle shooting as a sport to the students, for it is interactions like these that ultimately lead to the popularity of specific sporting disciplines and hope that the great talents that we witnessed here in BESC will one day, transform into medals for the Nation”.