Every child looks forward to the leisure hour – When will he carry his bats outside, someone will get the ball, others will get wickets. When the ball is thrown, the child hits a Six! But, Oh No! He breaks the window pane of a grumpy neighbor and how everyone scatters away with their belongings to escape the scolding. In times of IPL, as KKR rolls down Rajasthan’s wicket, the lane echoes with HOWZZAT! Such stories prevail throughout the country. For us Indians, “Cricket is not a game; it is a Religion”.

Beating the brutal hit of Covid-19 pandemic, The Bhawanipur College conducted the most awaited seminar “ASPIRE PERSPIRE INSPIRE” where they invited the Indian Cricketing Legends, Mr. Arun Lal and Mr. Devang Gandhi to share words of wisdom with students who want to pursue their passion for sports. The event witnessed focused on Zoom and Youtube (Live). The event commenced with opening remarks by Prof. Dilip Shah who continued the conversation with the speakers through out the event. 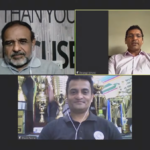 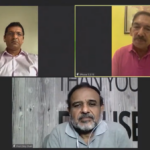 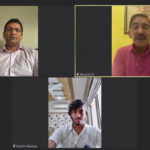 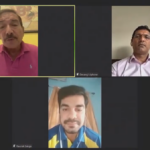 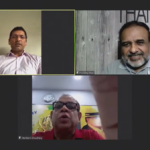 Hailing from Kolkata, both cricketers were reminiscent of the time they had spent in Northern Park which is the practice ground for BESC as well. The event was an exception in itself as it was a direct interaction between two celebrated sportsmen and the students of our college. Both, Devang Gandhi and Arun Lal spoke about their journey as a cricketer and gave an account of their struggles. The students asked them various questions which were answered by personal anecdotes and inspirational stories of their fellow teammates. Not only that, they also shared a few tactics to be followed while playing a match. It was like a one-on-one guidance session to each student who felt elated after receiving advices from the two legends.

Our hearts have been etched by the golden words said by Mr. Devang Gandhi and Mr. Arun Lal. The former said, “Do not get boughed down by failure. Work on your flaws and come back stronger.” Whereas, the latter said, “Deficiency in talent can only be filled up by hard work”.

The event was put to an end by Prof Dilip Shah’s closing remarks. He said that the speakers brought out the true essence of the webinar, that is, to “Aspire, perspire, inspire” which shall now transpire among the students.