“Lata is legendary …Lata is larger than life …
Lata is infinite thus Lata is Anant”.

The Crescendo collective of the Bhawanipur Educational Society College held a teary tribute on February 12, to the prodigious artiste who was certainly no less than an institution in herself, to acknowledge and applaud the distinguished efforts.
The Nightingale of India, Lata Mangeshkar, left for heavenly abode in the wee hours of February 6, and the people of the country bid farewell to Didi with tears in their eyes. People from all around the world were grieving the demise of the Queen of Melody. Her sudden demise marked an end of the glorious musical era. Everyone looks up-to her for her unswerving and huge contribution to the musical industry, for having raised the standards of excellence. Recipient of the ‘Padma Bhushan’ and ‘Bharat Ratna’, Lata’s charm was not just restricted across nation but her rapturous strains will continue to be there round the world. 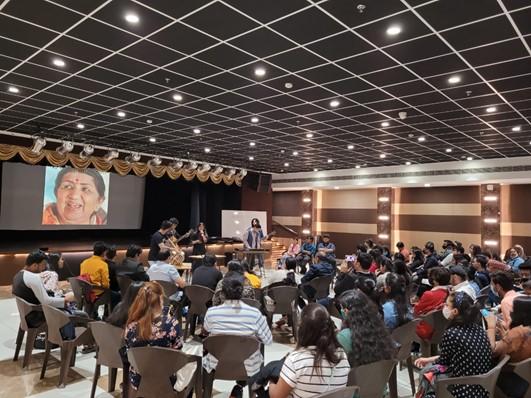 The event started at 11 am sharp with Prof. Dilip Shah, Dean of Student Affairs, calling out a speech on the contributions of Sri Lata ji, and paying her a 2-minute silence tribute with the whole audience and students. The tribute then began with the first performance of the day by Prof. Vasundhara Mishra, Department of Commerce, singing some of the classic golds of Lata ji. Some of the faculty members then joined one by one to pay the last honour to her by singing many of her songs.
Mr Sourav Goswami, singing teacher of the crescendo collective sang melodiously Aankhein khuli ho ya ho band from Mohabbatein and Ek pyaar ka nagma hai. Anchor of the event and an ex-student of the college, Anjali Dubey gave a performance on Aaj phir jeene ki tamannah ,Subhalaxmi Majumdar , from the crescendo collective beautifully sang Ek Radha ek meera . Pritam Kumar, a 3rd year student from the collective took the event to another level with his melodious voice singing Lag jaa Gale, Tere liye hum hai jeeyein and many more classics. Along with the audience joining in this musical journey.
The event came to an ending note with the last performance by Sinchan Dasgupta, 2nd year student from crescendo collective, singing Aap ki naazron ne samjha with his overwhelming voice making the audience teary-eyed.