The history of Agriculture in India dates back to The Indus Valley Civilization. Today, agriculture holds a massive significance in India as it is the primary source of livelihood for approximately 58% of Indian population and has contributed about 17% to our county’s GDP. 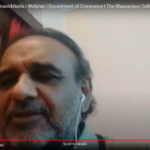 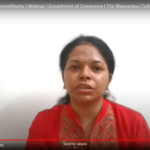 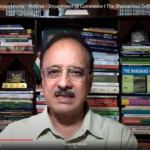 This season of the year which has been adversely struck by a worldwide pandemic has posed a greater threat to Indian Economy. Concerning this situation, Prime Minister Narendra Modi along with Finance Minister and Law Minister announced the “Atmanirbhar Bharat Abhiyan” or “Self-Reliant India Mission” on 12 May 2020. Their aim is to make India a Self-Reliant or Self-Sufficient country by pursuing policies which are efficient, competitive, and aim towards being self-sustaining and self-generating.

Clubbing both concepts, The Bhawanipur Education Society College conducted a very fruitful and unique seminar, “Agriculture as a path to Atmanirbharta” on 27th August 2020, virtually on Google Meet. Organised by the Department of Commerce (M), the event saw the participation of 130 students and teachers which also included faculties from outside the college. The event commenced with an introductory note by Prof Dilip Shah, who also introduced the speaker Devinder Sharma, India’s leading agriculture and food policy expert, a researcher and writer.

The speaker mentioned some very significant aspects of India’s agricultural sector and its performance, which we were not aware of. He asserted that Lockdown has given a reality check and certified agriculture as the foundation of Indian Economy. During this lockdown, the agriculture sector witnessed a boom due to the harvest of Rabi crops, ascertaining that it has the potential to revive the Indian Economy. Despite immense capability, the Indian Agriculture sector is in a very sorry state. Due to large ignorance, the growth of agriculture has stagnated in India. Now referred to as a ‘non-performing sector’, agriculture in India faces lack of income, inadequate income to farmers and huge price rise of crops. The event concluded with an important realisation that agriculture has now declined to an impoverished sector in India. There was a very insightful round of Question and Answer and the vote of thanks was given by Prof. Anamika Pal.

The seminar was an eye opener for today’s youth. Around 70% of Indian households are engaged in agriculture. This directly indicates to the fact that Indian Agriculture has great potential to mend the cracks in the Indian Economy. It is high time that we must focus on uplifting agriculture in India before it is too late.