The Department of History of The Bhawanipur Education Society organized a lecture on November 26, 2022, entitled ‘The Sleuth and the City: Historicizing the Fictional Detective and Urban Modernity.’ Mr. Arup Ratan Samajdar, CWTT, Department of Film Studies, BESC, was the session’s speaker. The lecture began at 2:30 pm in Room No. 547 with a welcome address by Mr. Avigyan Banerjee from the Department of History. 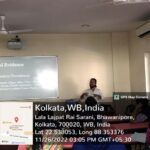 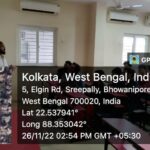 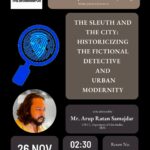 Mr. Samajdar began by describing the idea of urban modernity and by placing the fictional detective as a character in and of modern cities. Talking about the nature of the fictional detective as an urban cultural expression, he pointed out how it changed through the nineteenth and twentieth centuries as the cities themselves transformed, getting affected by broader historical currents. By identifying the centrality of the city-space in the novels, Mr. Samajdar delineated how the notions of truth and rationality interacted and evolved with the fictional depiction of the art of detection. He explained his arguments through citations of multiple examples from both classical and hard-boiled detective novels. Facets of cultural, social, and literary history through an interdisciplinary lens were effectively narrated by him.

The two hours long lecture ended with a vote of thanks by the Head of the History Department, Professor Piu Chatterjee. 30 students and 13 faculty members, across various departments of the college, attended the lecture.