The Department of Bengali in collaboration with IQAC organized a special lecture on Rabindranath er Shikhachinta o Bortomankal, held on 12th November 2022 at 2.00pm. The esteemed speaker of the lecture was Swami Shastrajnanananda (Secretary, Saradapith, Ramkrishna Math o Mission, Belur & Former Principal of Belur Vidyamandir and Narendrapur, Ramakrishna Mission College). The event took place in the second floor auditorium. Swami ji discussed how Rabindranath Tagore practiced and propagated education as a continous learning process. He further explained that Tagore believed that knowledge helps to emancipated mankind from ignorance and lead the civilization towards a higher form of consciousness and moral enlightenment. Swamiji narrated many insightful events related to Tagore’s life as the Vice Chancellor of Vishwabharati, which clearly indicated his liberal and dynamic approach towards value education. Swami ji further explained that there is a huge gap between Tagore’s way of educating the young minds and the contemporary outcome based education system aimed at alienating the young souls from creativity and freedom of deliberations. He concludes his lecture with the remarks that while present education policies are more hard power oriented and mechanical in its approach, on the other hand, Tagore’s philosophy and thinking on education was more inclined towards soft power approach based on literary and cultural ideas and value system. The presence of  25 teachers and 20 students made the program a huge success. 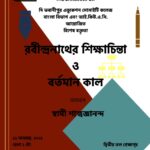 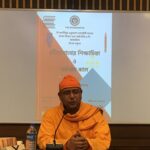 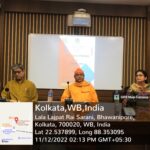 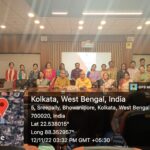