The Cultural and Educational Trip Committee of the Science Section of The Bhawanipur Education Society College, Kolkata had organised a cultural programme on the occasion of the 161st Birth Anniversary of the great Bengali polymath, The Bard of Bengal, Rabindranath Tagore (sobriqueted as Biswakabi or Kabiguru) on 7th May, 2022 at the Jubilee Hall of our College involving the different semester students of all the departments of the Science Section. The entire programme was ideated by our Vice Principal Madam, Dr. Pinki Saha Sardar, without whose conceptualization and support, this event would have been a drudge. All the other Faculty Members including the Committee Coordinators, Dr. Subarnarekha Bhattacharya and Ms. Priyanka Banerjee and Ms. Anamika Guha, one of the active members of the Committee were also very instrumental with their cooperation and contribution to the same. Mr. Swagato Mukherjee, a Semester-IV student of the Department of Chemistry was the student coordinator of the entire event who had managed the entire event in a very disciplined manner along with all the Teachers and his efficient team of Student volunteers and participants who did commendable event scheduling, gave creative inputs, suggested good visualisation arrangement and thematic representation and had great communication amongst the participating Students and the Teachers. There were a plethora of performances paying tribute and homage to the spiritual and mercurial songs, elegant prose and magical poetry of Tagore. Total  123 students and  34  Teachers participated in the celebration and enjoyed that lively session. 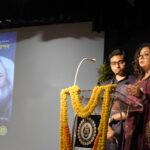 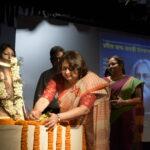 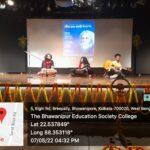 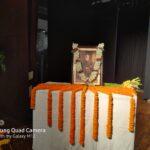 Sinchan Dasgupta, a Semester-IV student of the department of Chemistry had inaugurated the programme with a splendid presentation of Boro Asha Kore, a very famous song of Tagore. The inaugural song was followed by the inaugural dance, which was performed by Debashree Ganguly, a Semester-IV student of the Department Of Chemistry. She performed on the song Eki Labonye Purno Prano, another splendid creation of Tagore. The event was beautifully anchored by Asmita Sharma and Souryadipto Roy. The Jubilee Hall was decorated in a very aesthetic and visually pleasing manner with white flowers, diyas, flower rangolis and paintings made by the students keeping in mind the charm and essence of Rabindra Jayanti. A framed portrait of Rabindranath Tagore was kept as the centrepiece, adorned by flowers and diyas, for everybody to pay respect. 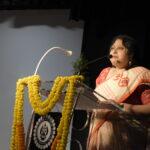 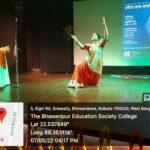 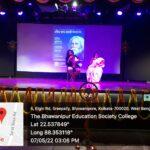 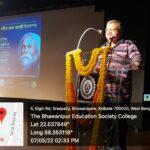 There were inaugural speeches by the Vice-Principal, Mrs. Pinky Saha Sardar and other faculty members of the Science Department. Akash Mehta Sir was the teacher coordinator of the Computer Science Department, and Anamika Guha Ma’am, Priyanka Banerjee Ma’am and Shawni Dutta Ma’am (faculty members from the Computer Science Department) had exhibited their calibre in dance and were also a part of the coordination team. Swagato Mukherjee, a student of the Chemistry Department had performed along with the Vice-Principal, the part of the audio drama Dakghar written by Rabindranath Tagore where Amol and Doiwala (the curd seller) makes an appearance. It was prepared in a very short time yet executed nearly perfectly and exhibited great student-teacher coordination. There were also multilingual speeches and poem recitations by students which is something that is seldom seen in Rabindra Jayanti programmes and so it had garnered a lot of attention. There was a duet musical performance by Sushweta Adhya, a student of the Department of Electronics and Rongit Mukherjee, a student of the Department of Computer Science, which had received a lot of applause. There was great participation from all the students and many had also volunteered for the event at their own will. The core team of event arrangers, consisting of five students, had worked day in and day out to make this a success. The unending enthusiasm among the students and the teachers and the immense love they have for Kabiguru in their hearts was probably the most beautiful sight to behold. There were music performances from various science faculties — Mrs. Pushpita Gangopadhyay (faculty of Statistics), Subarnarekha Bhattacharya Ma’am and Suparna Basak Ma’am from the Physics Department.  There was also a very beautiful and expressive recital of Tagore’s Hothat Dekha by Sisir Kana Malakar, a Semester-IV student of the Department of Chemistry. She won hearts with her expressions. There were two balletic and lithe dance performances by Bornali and Ishika, which were really the crown of the entire event! Bornali had performed a dainty piece on Bhanusingher Padabali and Ishika had presented an exceptional Kathak piece. 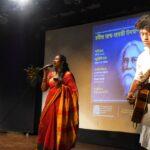 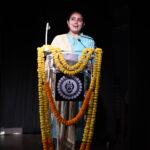 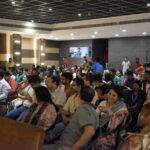 And last but not the least, the concluding performance of the day was a heavenly and a gem of a presentation. It was a bandish recital on Raag Bhimpalasi coupled with the Rabindrasangeet Bipul Taranga Re by Riya Baidya(Semester-IV, Physics Department), where she had herself played the harmonium and in accompaniment on the tabla by Swagato Mukherjee and on the guitar by Sinchan Dasgupta. It was probably the most attractive garnering performance of the day, which had its audience in awe and left completely mesmerised by the expertise and sharp calibre and strong hold of the three musicians in their respective fields and with their respective instruments. The marvellous arrangement drew in on a close in the early evening. It was brought to an end by professors and by the event coordinators with concluding words of gratitude and happiness and a hope for another lovely association on Rabindra Jayanti the upcoming year.