In his celebrated book ‘Bharat Swadhin Holo’, Maulana Abul Kalam Azad remarked,” The country achieved independence. But before it’s denizens should taste victory and freedom, they opened their eyes to discover the catastrophe that accompanied the historical event.”

Indeed the atrocities of the partition of 1947 had instilled fears in the minds of those who had to bear the brutalities of the manmade disaster. It is no surprise therefore that this incident drove writers of great repute such as Sadat Hasan Manto, Ismat Chughtai, Sunil Gangopadhyay, Khuswant Singh, Hasan Ajjujul Haq, Samaresh Majumdar and most recently Amitav Ghosh to weave stories in the ambit of the cataclysmic event. These texts have gone beyond the boundaries of history and have brought in the notice of many the exodus that took place across frontiers in the mod-20th century.

It is been close to 70 years and still the effects and repercussions of the partition are felt. The literary texts still appeal to the masses. Keeping in mind the relevance and pertinence of the event, bringing into light the vast literature of the contemporary period, the Department of Bengali and History of the Bhawanipur Educational Society College along with the Department of Bengali, Jadavpur University organized a Three Day International Seminar from the 6th of February, 2020 to the 8th of February, 2020. The venue for the event was the Second Floor Auditorium of the BES, College.

The Prologue Session of the Seminar began on the 6th of February, 2020. On the first day, there were three speakers namely, Dr. Debjani Sengupta, Professor, Department of English, IP College, New Delhi, Shri Shiblee Noman, renowned Journalist from Dhaka, Bangladesh and Shri Soumitra Dastidar, Film personality and Director. Prof. Sengupta presented her paper where she spoke about the presence of Bengali culture on the people of Tripura and took reference from the stories of Sunanda Bhattacharya. 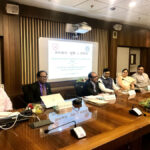 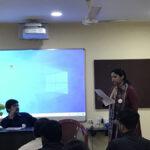 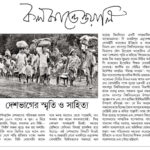 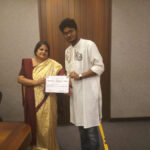 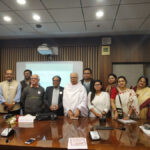 Shiblee Noman who spoke after her spoke of the importance of the Partition on the youth of the two nations who have heard only stories of the incident bit have not experienced them personally. He was followed by Shri Soumitra Dastidar who presented to us his film “Shimanto Akhyan” ( Border Narratives). This film highlighted the idea that the two countries of India and Bangladesh could be separated by borders but not in spirit and culture.

The second day was the inaugural session which commenced with a song sung by Prof. Raktima Ghosh of the BES, College. The day progressed further with the welcome address of Dr. Suchandra Chakravarty, the Teacher- in Charge of the BES, College. The Vice Chancellor of Jadavpur University, Dr. Suaranjan Das also graced the occasion and he spoke about understanding the partition from not only the perspective of Bengal but also from the Pakistani side as well.

Though the panelists adjourned for a brief tea break they immediately came back to listen to the lecture of Dr. Barenda Mandal, Head of the Department of Bengali, Jadavpur University who spoke of the Partition in its historical context and tied it to the present scenario of India as well. This session was chaired by Dr. Rafi Killah Khan, Vice Chancellor, Sheikh Hasina University, Netrokona, Bangladesh. After the lunch break it was time for the second session of the day where both Dr. Sohini Ghose and Prof. Kavita Punjabi spoke about the different facets of the event. While Dr.Ghose stuck to the socio-economic aspect of the issue, Prof.Punjabi moved paths and her paper titled “The Problem of Forgetting against Memory”, emphasised on the need to remember the happy and euphoric events attached to the Partition of 1947 over the grim and sad incidents.

The second day had set high hopes and the day started with the first session where Dr. Pabitra Sarkar narrated his paper titled “Desh Bhag: ‘Bektigata Ebong Bisheshgata'”. Prof Manankumar Mandal highlighted over the stigma of partition through his discourse titled” Partition er Daag”. After the tea-break it was the turn for Dr. Sarkar to chair the next session where Dr. Nandini Bashist and others participated in the discussion. Following the lunch-break, the panelists again assembled with Sandip Bandopyadhyay, renowned columnist of Partition texts chairing the last panel. Dr.Anindita Ghoshal spoke about the case of Tripura and the impact of Bengali Language and culture on the people of Tripura while Shri Syad Abul Maksud narrated snippets from his paper titled “Deshbhag er Artha Samajik Patabhumi Ebong Sahitya Pratifalom”.

The Three Day International Seminar came to an end when Prof.Tathagata Sen , I.Q.A.C Coordinator, the BES, College, delivered the vote of thanks to all the signatories who had assembled over the course of three days to make this seminar a success.

Apart from the lectures of these renowned scholars, there were also parallel sessions which were conducted on the 7th and 8th of February respectively where scholars and researchers presented their papers. These parallel sessions were chaired by important and eminent scholars like Bhaswati Chatterjee, Kuntal Mitra, Arpita Bhattacharya and others. The partition seminar also got recognition from the reputed Bengali daily ‘Ei Samoy’ in their ‘Kolkattawali’ segment on 8th February, 2020.