The world has never witnessed a situation even remotely close to what it is going through now, locked down as it is. Naturally, the level mental, psychological stress is shooting through the stratosphere and especially vulnerable are young adults of the college going age who are not only being subjected to an inordinate amount of pressure (read depression in extreme cases) but are also unaware as to where to seek redressal.

The Bhawanipur Education Society College (BESC) has always took pride as being the “guardian-angel” of the students, custodian of the wealth of parents who entrust it with the wellbeing of their children identified the alarming situation, organised a webinar in which noted psychological counsellor Aditi Ganguly virtually met, discussed and addressed the mental health and wellness issues raised by the 60 students who attended the programme. Gaurav Killa was the student coordinator while Divya P. Udeshi of the Dean’s Office oversaw the successful conduct. The entire programme was conceived and implemented by Prof Minakshi Chaturvedi. 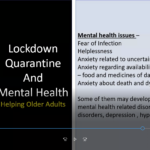 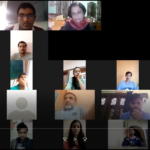 Prof Dilip Shah, the Dean of Student Affairs of the BESC introduced the speaker and made it clear upfront that the programme was more than just a talk by a psychologist – it was an effort to co-opt the students of BESC so that they could take up the role of “enablers” and help people in their immediate vicinity – family and friends – suffering from mental health issues brought about by Covid19 and the subsequent lockdown. “The BESC does not believe in knee-jerk reactions” he said, “on the contrary we take pride in being proactive and this too, is a step in that direction”, urging the students to come forward in this hour of need, absorb the lessons being imparted by the guest speaker and spread out to help themselves, their near and dear ones.

The speaker made a detailed presentation in which she explained how the lockdown induced stress is affecting people of different age groups and socio-economic profiles in different manners. She spelt out the mail symptoms that should be identified as red flags for different groups of people and explained how each issue must be addressed before professional help is sought and made available.

The speaker also went at great lengths to explain how the young adults should not lose their positive attitude and should break down their days to tide over the abnormal situation that is almost akin to forced captivity. She spelt out the do’s and the don’ts taking special care to explain what are the areas that the students should focus on and the areas that they should try and avoid.

The third part of the talk was about the students becoming enablers – touch points in their respective social circles who will not only identify potential cases of psychosomatic trauma but will also be the first line of defence by providing the ailing with immediate solace. She explained that globally, as the problem is of such unprecedented scale, and that the number of mental trauma cases are expected to be so high that trained counsellors will not be available in adequate numbers to provide succour to the needy.  Therefore, she said, the young must come forward, like the para military, to address the issues as otherwise the disaster is capable of spiralling out of control, leaving the professionals to address those that need their attention more.

She thanked the BESC for being progressive enough to be thinking in these terms, way before the thought has even gained currency and called the webinar a trailblazer of sorts as the route is expected to become the preferred path over time. She also pointed out that such a course of action will not only help the students who are themselves in duress to rise above their own relatively smaller problems by addressing the problems of others, but will also have the potential of starting a ripple on the surface that will test both eternity and infinity.

As many as hundred questions have been submitted by the students to the coordinators of the event which are being individually investigated by the speaker. She will then post the replies individually and in strict confidence to the ones raising them. Special cases that need personal intervention will be identified by the counsellor and the respective students will be encouraged to talk to her one on one, for which she has kindly given her consent to the college. Which is another first of its kind by BESC.

The programme ended with Prof Dilip Shah thanking the speaker and promising to find ways to take the effort forward.