On the 25th of August 2022, there was a seminar on ‘Introduction to Python’ which commenced from 11:30 a.m. In the beginning Prof. Dilip Shah made the opening speech followed by the coordinator of the event Nehal Mehta gave an outline of the programme. This was followed by the speaker Mr. Dhananjay Das, a data analyst talked about this programming language which is necessary in today’s times as one uses data analytics for data driven decision making. 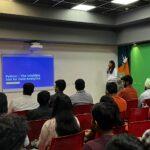 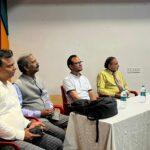 One must back their decisions with data, not merely past experiences. The technology used nowadays; ERP Business application, Informatica, Altery X, Sql server, Python and Powerbi to name a few. It is through the combination of these tools that one gets data. For instance, if a company has a target of achieving 5 billion dollars but can achieve only 4.5 billion dollars one has to see the intervening problem that lies within. The problem has to be resolved through identifying data through data analysis through tools like Python, Excel. Machine learning is learning from past behaviour and predicting through AIML technology. Through testing hypotheses one can improve on customer service through response of stimuli to outputs. Business simulation is a combination of inputs to create outputs.

The programming language Python was invented in 1991. The name was based on a prevalent television show. Python is a high-level, interpreted, object oriented and much purpose programming language. 2008 was the turning point for Python as it became extensively used thereafter. This coding programme developed by Guido van Rossum surpassed Java in its usage. Python is a multipurpose coding application used for web development, data analytics, android development to name a few. The advantages of Python are that it is easy to use, it has resource availability, it is multi-interface and opensource. 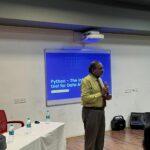 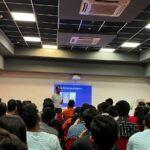 After the theoretical aspects, the speakers explained to the students the application procedure of Python. After doubt clearing session a vote of thanks the session came to a close. It was an enriching experience for the students.