“Neel Noboghone Asharh Gogone Til Thnai Aar Nai Re” which merely translates the arrival of monsoon after the scorching heat in its full swing. Monsoon and Rabindranath Tagore are interspersed with each other and the monsoon bewitches every music lover with his songs. Monsoon is the preserver and at times the destroyer, yet it has inspired the poets and artists to create some of their most compelling works. To celebrate and embrace the month of monsoon, and considering the entertainment-starved youth of provincial metropolisBhawanipur Education Society College initiated to introduce an event namely “Rim Jhim” on 3rd August, 2019 at 10:30 am in the Knowledge Resource Centre. The event was organised by the students’ collective Crescendo. 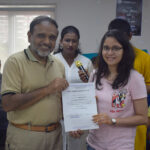 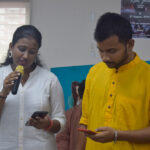 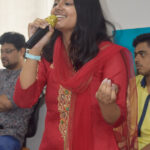 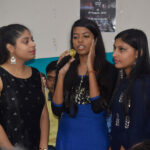 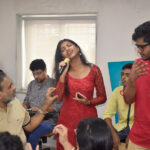 Dr Vasundhara Mishra began the programme with her inaugurating speech about music and how it is associated with monsoon. She recollected the legend stating that Tansen’s physical agony after singing Raga Deepak was pacified after listening to Raga Megh Malhar. Therefore Monsoon has long been associated with music and vice versa. The atmosphere was fairly intense yet serene as the Library was filled with approximately 50 students from divergent streams like BBA, B.SC & B.COM and the Dean of Student Affairs, Professor Dilip Shah’s motivating speech regarding the melody of life enthralled everyone.With much enthusiasm students attended the event.

Sourav Goswami, the music mentor of Crescendo sang a beautiful song related to saawan and received loud applause from the responsive students. It was followed by two other performances by Tathagata Biswas and Ritwika on the song “RIMJHIM E DHARATE” & the other by Aishani Dastidar on the song “BARSO RE MEGHA MEGHA”. Anjali Dubey hosted the whole event and it was organised by Shyam B Prasad and Samrat Ghosh. The event being organised in such a close knit atmosphere allowed everyone to speculate every single emotion associated with their performance. The rendition that the melodious strains resonated filled the air of Bhawanipur Education Society College with tranquillity.

The solidarity of this event was something to look forward to when Dr Vasundhara Mishra surprised everyone with her melodious rendition. This event was a proof of how music has enabled to bring peace and scatter love among everyone. With a pledge to rediscover and recreate music throughout the year the event came to an end.